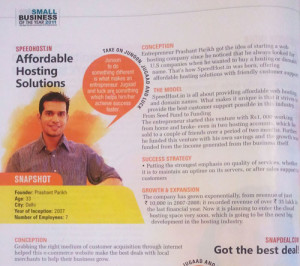 After that closed down, i started web hosting company (SpeedHost.in) with no prior knowledge on hosting… i just had a hunch that this was going to be a great service to sell. I knew that it would be challenge as hosting is a 24/7 business and i moreover i did not know what servers are and how i can sell. So i started reading up on hosting and found that once can start with a reseller account and a website. This was 2007 and SpeedHost.in was a brand new entrant into this domain which was already dominated by a few big companies (Probably you can make out buy now that i am not that big on research). Never the less, i was and still am a very customer centric person… I knew that there was lot or margin in hosting and the existing companies in India were selling at a much higher price as compared to US companies and that the Indian customer was still buying from India then US as business still paid in cheque deposit or cash deposit than online payment. I capitalised on this and since i hand knowledge of web designing, i designed a UI where there was no clutter, the user did not have to look all over the page to buy the hosting package and that my cell number was clearly visible on all pages (yes, i provided 24/7 customer support for over 3 years) Since i was competing with some big players then, i knew that the only way i can grow is by being on the top of Google search, so for the next 1 year i devoted a lot of time on learning SEO and getting various search terms ranked on the top… by 2009, SpeedHost.in was ranked either #1 or #2 on almost all search keywords and the traffic started poring in. I moved in to a small office and took my first couple employees. There was no looking back then, in the next couple years, SpeedHost.in grew from 30-40 paying clients to about 4000. I am proud of the fact that the customer service we provided was unparalleled to even the hostgators of the world. From a startup investment of Rs.2000, SpeedHost.in grew to close to a crore in turnover a year with multiple servers located in India for the fastest speed and in house and outsourced employees. Then the bug set in to do something else in life and so SpeedHost.in got acquired by Directi.
END_OF_DOCUMENT_TOKEN_TO_BE_REPLACED 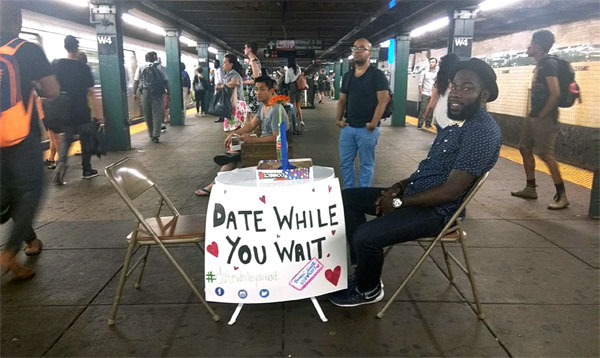 Thomas Knox from New York came up with this dating hack “Date while you wait” in the New York city Metro… basically Thomas wanted to do something to make people smile and enjoy their time while waiting for the Metro. I think entrepreneurs can learn a valuable lesson here… “it’s about meeting people and making connections”.

And if you are single, i suggest you read these 5 quick tips on landing a date. Good Luck!

I got the below email from easyhire today (I don’t remember signing up with them in the first place.) Anyways, normally i would just delete such emails but since the subject was though provoking, i decided to give it a read…

While their intention might good, i think their choice of words is very poor. Why would anyone hire an employee, if the said employee was let go from their previous job due to non-performance? And if such an employee was indeed hired by a startup.. do you think that startup would save money on training costs and other expenses? Would that employee be able to guide and mentor a team?

I think there is good lesson to be learnt from this email… Newsletters should be proofread multiple times by different people before they go out to the intended subscribers or even if they are being sent as spam. You never know who would post it on the web 🙂

Saw on my FB wall a post from someone saying that Flipkart is force saving your credit card info when you make a payment via your credit card. I checked it out for myself and yes, it does! (screen shot)

It would have been perfectly acceptable if users were given an option to save their card on checkout but this somehow irritates me. Maybe for most users, this is perfectly ok and Flipkart does give you the option of removing your card from file from the “my account” menu but this is an additional step which i would not have to take, had i been given the choice in the first place.

What do you think?